Canadian Actor Ryan Reynolds is about to become seriously rich and not because he’s a great actor (which he is). 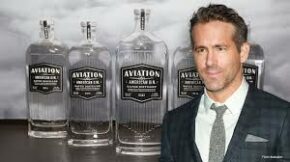 Diageo, the British multinational beverage alcohol company, has agreed to pay up to $610-million for Aviation American Gin which is co-owned by the 43-year old Vancouver-born performer.

Reynolds acquired a minority stake in Aviation in 2018 and it’s now the second largest super-premium brand in the US.