BILL MORNEAU RESIGNS AS FINANCE MINISTER, DENIES HE WAS ASKED TO STEP DOWN

He has been the only finance minister to serve under Prime Minister Justin Trudeau.

Bill Morneau suddenly resigned Monday evening, saying he had considered leaving his role as finance minister for some time, adding he never intended to run for a third term as MP.

“I think it’s necessary to have a finance minister who has that longer term perspective to get us through a long term recovery,” Morneau explained.

The path to an economic recovery from the COVID-19 pandemic could take years to play out and Morneau said the government needs a finance minister who wants to stick around for the long haul. 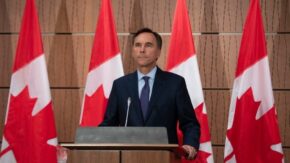 “As we move to our next phase of the fight against the pandemic and pave the road toward economic recovery, we must recognize that this process will take many years,” Morneau continued, “It’s the right time for a new finance minister to deliver on that plan for the long and challenging road ahead. That’s why I’ll be stepping down as finance minister and member of parliament for Toronto Centre.”

A new finance minister could be announced as early as Tuesday.

Opposition MPs have been calling for Morneau’s resignation for weeks over his role in the WE Charity controversy. Both Morneau and Trudeau are being investigated for possible conflict of interest by the federal ethics commissioner.

There was speculation last week that Morneau was about to be replaced after news broke that former Bank of Canada and Bank of England governor Mark Carney was helping to advise the prime minister. But Trudeau then issued a statement saying he had full confidence in Morneau and reports of policy clashes between them were false.

Monday evening, Morneau denied Trudeau had asked him to resign.

Trudeau has issued a statement, thanking Morneau for his unwavering leadership and commitment to service through the pandemic. He also says Canada would vigorously support Morneau’s efforts in becoming the next secretary general of the Organization for Economic Cooperation and Development.