Thousands of people have gathered in a square near Belarus’ main government building for a rally to support President Alexander Lukashenko, while opposition supporters whose protests have convulsed the country for a week aim to hold a major march in the capital. 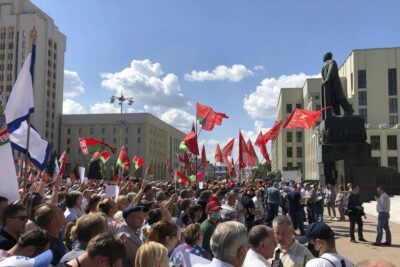 Protests began late on August 9th at the closing of presidential elections.

Official results say the authoritarian Lukashenko, in office since 1994, won a sixth term in a landslide with some 80 percent of the vote.

Protesters claim the election was a sham and allege results were manipulated.

As Lukashenko’s supporters waited for his expected appearance at the Sunday rally, many chanted Lukashenko’s nickname of “Batka,” or father.