PROVINCE GETS MORE INVESTMENT IN BACK TO SCHOOL PLAN

Under pressure to deliver a back-to-school plan that will satisfy parents, students and teachers’ safety concerns, the province announced a new investment to help get schools ready. 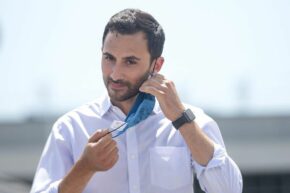 Education Minister Stephen Lecce says $50-million will be spent on H-VAC systems to improve ventilation, $18-million for learning supports. School boards will also allow boards to dip further into reserves that will free up $500-million more to hire more staff.

Lecce said this morning that he also doesn’t have a problem if school boards decide to stagger the start dates for students.
“If school boards wanted to stagger the starting–for example kindergarten and grade one on the first day, grade two and three on the Tuesday and staggering to mitigate having a mass volume of students entering schools on the first day, that seems prudent and would be supported by local health authorities,” Lecce told CP24.
The province stopped short of mandating smaller classes and a delayed start in the fall, something parents and teachers have been demanding.
Teachers unions still aren’t on board with the plan. They say the province didn’t consult them and they’re still low on details.
“The Ministry has abdicated its responsibility to fund a safe return to school,” said OSSTF president Harvey Bischof. “We don’t know how school boards might use that flexibility so it doesn’t tell us what we need to know.”
Ontario’s public health leaders, including Ontario’s chief medical officer Dr. David Williams approves of the plan.