Michelle Obama has revealed she is suffering from “low-grade depression” because of the pandemic, racial injustice and the “hypocrisy” of the Trump administration. 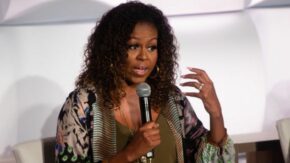 The former U.S. first lady explained managing “emotional highs and lows” requires “knowing yourself” and “the things that do bring you joy”.

Obama admitted she has had difficulties with her exercise routine and sleep.

“I’m waking up in the middle of the night because I’m worrying about something or there’s a heaviness,” 56 year old Obama explained during the second episode of her podcast.

“These are not, they are not fulfilling times, spiritually,” Obama told her audience, “I know that I am dealing with some form of low-grade depression. Not just because of the quarantine, but because of the racial strife, and just seeing this administration, watching the hypocrisy of it, day in and day out, is dispiriting.”

She also said it is “exhausting” to be “waking up to yet another story of a black man or a black person somehow being dehumanized, or hurt, or killed, or falsely accused of something.”

“And it has led to a weight that I haven’t felt in my life, in a while,” she said.

However, she said “schedule is key” to managing these feelings and that maintaining a routine has become even more important to her in the pandemic.