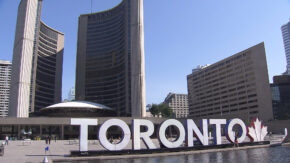 “I’m optimistic that a big part of our problem will be resolved with these funds,” John Tory said after the official announcement was made by Premier Doug Ford on Monday.

The premier says the agreement reached with the federal government provides $4-billion for Ontario municipalities hard hit by COVID-19.

In all, the Ontario government is set to receive $7-billion as part of the feds’ Safe Restart Agreement.

“This is a historic level of support that’s being provided during unprecedented times,” declared Ontario Finance Minister Rod Phillips.