GRAND DAME OF THE VIOLIN DIES AT 96

Ida Haendel, a Polish-born violin prodigy who became a sought-after soloist after moving to Britain, has died at an assisted living centre in Florida. 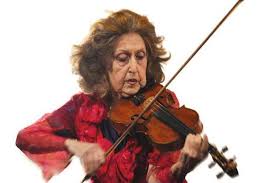 She was just 3 when she began performing.  She picked up up her older sister’s violin and amazed her mother by reproducing a song that she had just heard.

She went on to perform professionally for some eight decades, playing morale-boosting concerts in London during World War II before touring the world and acquiring her “grand dame of the violin,” reputation.

A nephew confims she had been hospitalized in March with respiratory problems and was later treated for kidney cancer.