He was a longtime Ontario healthcare executive and special advisor to Premier Doug Ford.

Dr. Rueben Devlin has died, after undergoing cancer treatment since 2011.

A statement from Humber River Hospital called Devlin “a driving force behind the strategic vision for the future of the hospital.”

Responsible for a digital transformation at Humber River Hospital, Devlin had advocated rolling out some of those innovations across the province. 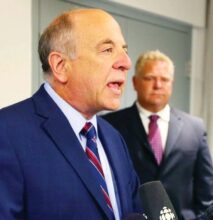 A tweet from Premier Ford says, “We lost an incredible public servant and friend. Dr. Rueben Devlin’s service to the people of Ontario won’t be forgotten.”

An orthopedic surgeon by training, Devlin served as president and CEO of Humber River Hospital for 17 years from 1999 to 2016. Prior to that, he practiced as a surgeon in Newmarket for 17 years.