Crews continued to board up more store fronts in Toronto’s downtown core on Friday morning, ahead of anti-black racism protests that are set to take place Friday and Saturday. 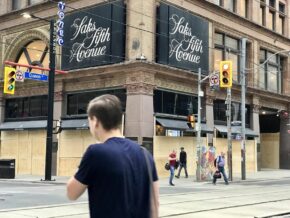 “I can tell you that through my front line officers, the vast majority of the people that have gone to the protests in the city of Toronto have been peaceful,” Chief Saunders explained, “There’s a lot of passion, there’s a lot of anger, and there’s a lot of hope. And I hope as Torontonians, we continue to do that.”

Thousands of protesters marched peacefully from Christie Pitts to Toronto Police Headquarters last Saturday in solidarity with anti-black racism protests that have been happening stateside since George Floyd’s murder in Minneapolis. Saturday’s protest was also held to honour Regis Korchinski-Pacquet, who fell to her death from a 24th floor apartment balcony in the High Park area last month during an interaction with Toronto Police.

In New York City, protesters stayed on the streets after curfew for another night, spurred by the death of George Floyd.

In Atlanta, mayor Keisha Lance Bottoms walked with protesters downtown, telling the crowd through a megaphone that, “there is something better on the other side of this.”

At a memorial service for Floyd in Minneapolis Thursday, mourners stood in silence for eight-minutes and 46 seconds, the span of time that a white police officer held his knee to Floyd’s neck, even as Floyd pleaded for air.