The violence that erupted across the U.S. this week continued overnight. 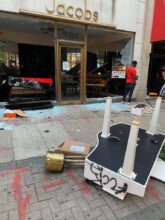 (Protest damage at a Steinway dealer in Philadelphia)

Protesters have been rallying in American cities since last Tuesday over the death of George Floyd, a black man killed when a white Minneapolis police officer pressed his knee into Floyd’s neck for nine minutes before he stopped moving.

During Monday evening, U.S. President Donald Trump used extraordinary federal authority, threatening America’s governors that he would send in the military if they do not stamp out protests in their states.

“I am dispatching thousands and thousands of heavily armed soldiers, military personnel and law enforcement to stop the rioting, looting, vandalism, assaults and the wanton destruction of property,” Trump explained.

Shortly after his Rose Garden speech, and ahead of Washington’s curfew, law enforcement officers used tear gas to clear a path through peaceful protesters so that Trump could walk to an Episcopal church for a photo opportunity in front of the arson damaged building.