ONTARIO'S STATE OF EMERGENCY TO BE EXTENDED UNTIL JUNE 30TH

MPPs return to the legislature Tuesday to debate extending Ontario’s state of emergency measures to June 30th in order to fight the spread of COVID-19.

The measure put forward by the majority PC government is expected to pass. 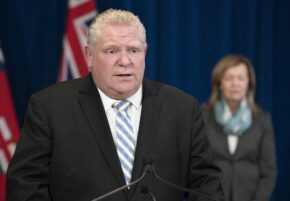 Premier Doug Ford says it’s the right thing to do.

“Four weeks is a long time, so a lot of things can happen in the four weeks, especially if we see the numbers come down,” Ford explained during his Monday briefing, “We’ll be looking at other stages and again a regional approach, but I want to get this economy going but I have to do it safely.”

The measure bans gatherings larger than five people and continues the closure of some businesses.

Former PC and now independent MPP Randy Hillier says he will vote against the measure, saying it gives the government too much authority.

Meantime, Ontario’s Health Minister says the province still has some distance to go before reaching stage 2 of the COVID-19 economic recovery plan.

Christine Elliott says the province will considering easing restrictions, “if new cases of the virus continue to decline and if there is sufficient capacity in Ontario’s hospitals. We also need to make sure that we are doing adequate testing, and we need to do the contact tracing as well.”

The number of new COVID-19 cases in Ontario jumped up above 400 on Sunday, after nearly a week of cases in the 300 range.

A state of emergency was first declared in Ontario on March 17th as COVID-19 began to take hold in the province.