YOUR VOICE MATTERS, ESPECIALLY IF YOU ARE WHITE: RAPTORS PRESIDENT MASAI UJIRI ON ENDING RACISM

Toronto Raptors President Masai Ujiri is weighing in on the murder of George Floyd in Minneapolis, and the protests across the United States that have followed. 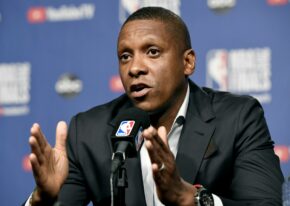 In a column published in the Globe and Mail, Ujiri writes about his reaction to seeing the now infamous viral video of Floyd, a 46 year old black man, being held down by the knee of a police officer who’s since been charged with murder.

At first, Ujiri says he thought it was from the past and when he realized it was current, he says he thought, “we need to stop the cycle and have the conversation about racism.”

He also references his confrontation with a security guard last year at Oracle Arena in Oakland when the Toronto Raptors won the championship. Ujiri wonders if he would’ve been stopped from going out onto the floor to congratulate his players if he was a white president.

Ujiri acknowledges many are asking, “what can I do?” He goes on to say, “your voice matters, especially when you are a leader or influential figure and especially if you are white.”

He says leaders have to be bold enough to state the obvious and call out racism.