It’s good news for the future of transit in the GTA.

The governing Progressive Conservatives at Queen’s Park have signed off on a preliminary agreement with York Region to move forward on a long promised northward extension of the Yonge Subway line into the 905 region.

The agreement sets a framework for the roles, responsibilities and potential funding mechanisms for the project which comes with an estimated cost of $5.6 billion.

Transportation Minister Caroline Mulroney says the federal government now needs to follow through on a commitment made during last year’s election campaign.

“The premier has weekly phone calls with the prime minister and the deputy prime minister and he has reiterated our call for the federal government to fund it’s full share of the four priority transit projects, which include the Yonge north subway extension,” Mulroney told CP24. 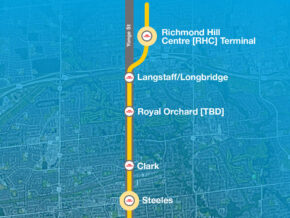 The northward extension of the Yonge Line beyond Finch Avenue would bring subway service to Markham and Richmond Hill.

It’s not yet clear how many stops will be included. The targeted finish date is 2030.