The dashing billionaire and bon vivant who was considered the father of modern gambling in China has died. 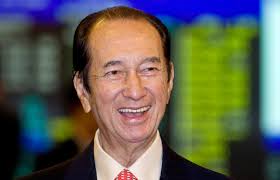 Stanley Ho was known as the “King of Gambling” after he secured a four-decade monopoly on casinos in the former Portuguese colony of Macao.

He was a lavish spender and an accomplished ballroom dancer who wielded great influence in both Macao and neighbouring Hong Kong while, according to U.S. authorities, maintaining ties to organized crime.

Ho also had stakes in businesses that run everything from the transportation that connects Hong Kong and Macao, to department stores, hotels, Macao’s airport and its horse-racing tracks.