“I think the regimen finishes in a day or two. Yeah, I think it’s two days, two days,” he said during a meeting with Arkansas Governor Asa Hutchinson and Kansas Governor Laura Kelly. 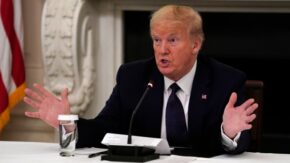 Trump revealed on Monday that he’s been taking the anti-malaria drug, along with zinc, to try to prevent a COVID-19 infection.

The U.S. Food and Drug Administration has warned against widespread use outside of clinical trials, but the White House physician said he felt that the drug’s possible benefits outweighed its risks.

“I get a lot of tremendously positive news on the hydroxy,” the president said Monday. He said at the time that he had been taking a pill “every day” for about a week and a half.

The president has taken heat for his use of the drug, which is largely unproven for preventing or treating the coronavirus.

Doctors with the World Health Organization say the science is still unclear on the anti-malaria drug that Trump is taking to try to prevent contracting COVID-19.

“At this stage, hydroxychloroquine has yet to be found to be effective in the treatment of COVID-19. In fact, warnings have been issued by many authorities guarding against the side effects of the drug,” explained Dr. Michael Ryan.

He admits the drug is just one of many possible therapies being tested internationally in clinical trials to see if it’s effective against the new coronavirus.