The brother of multi Grammy winner Carlos Santa has died. 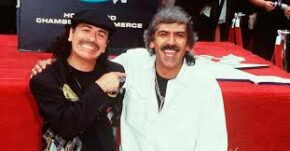 Jorge Santa played guitar with the band “Malo,” recorded and toured with his brther and had a hit in 1972 called Suavecito.

Jorge Santana’s death was confirmed by his brother’s manager but no cause was given.

“Malo” played a laid-back fusion of jazz, rock and different forms of Latin music. The band made four albums before Jorge launched a solo career. He worked and toured with Carlos and released an album called the “Santana Brothers” in 1994.