At least one financial analyst who is familiar with the details, says Quebecor’s interest in Cirque du Soleil seems logical provided the communications company opts to trim the size of Cirque’s entertainment business in order to revive its financial health. 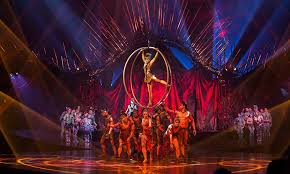 National Bank Financial’s Adam Shine evaluated a proposal whereby the Cirque would focus on six existing shows in Las Vegas and four others in China, Mexico, Germany and Orlando.

The plan would mean the end of 13 touring shows and 21 other productions under affiliated brands like the Blue Man Group.

Shine estimates that this plan could allow Cirque to generate revenues in the $700-million range with profits of more than 100 million.

Cirque has debts of more $900 million and laid off 95% of its workforce in March and cancelled 44 shows around the world, due to the pandemic.

Quebecor said last week it is prepared to inject “hundreds of millions” in order to consolidate shareholder control in Quebec.