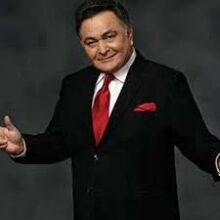 Kapoor was a member of the Kapoor acting dynasty which has long dominated the Hindi film industry.

He was diagnosed with leukemia in 2018 and returned to India last September after a year-long course of treatment in the U.S.

He was taken to hospital in Mumbai yesterday after complaining of breathing difficulties and died last night.