The Toronto sign at Nathan Phillips Square and the CN Tower were both lit up overnight in honour of the victims in Nova Scotia killed during the weekend shooting rampage.

And Nova Scotia’s flag is flying at the Ontario legislature in memory of the victims.

The death toll from the mass murder could rise today.

Nineteen people were confirmed dead as of Monday, including the shooter, but police expect there are more victims.

Investigators say the 16 crime scenes include five burned buildings where it is feared additional bodies will be found inside. 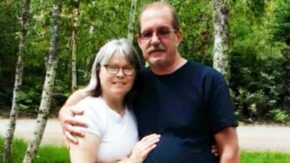 One of those buildings is a home owned by an Oshawa couple, Dawn and Frank Gulenchyn, who had moved to Nova Scotia recently to retire.

After being contacted by RCMP investigators, Ryan Farrington says he and his brother Jon have little hope their mother and step father will be found alive.

“They have confirmed that the house that my parents lived in has been burned to the ground,” Farrington told CP24, “They also confirmed that prior to that, witnesses did hear two gunshots before the house was set ablaze. Other than that, that’s all we’ve heard, that they were just going through the scene trying to find the bodies.”

Police are mourning the loss of Const. Heidi Stevenson, a 23-year veteran of the RCMP. Tributes poured in from police forces across the country for the mother of two who also left behind a husband. Her colleagues described her as a well-known presence in the community and a voice of the force.

Lisa McCully, a teacher at Debert Elementary School, was also a beloved member of her community, according to the school’s principal Scott Armstrong. She was the first to volunteer, he said, and that was evident in her years of work as a youth leader for a United Church of Canada bible camp in Berwick, N.S.