PUBLIC TOLD NOT TO GET CARRIED AWAY BY OPTIMISTIC FORECASTS

Ontario and the City of Toronto will be releasing their latest projection data on where they think the ongoing COVID-19 pandemic is trending. But people are being advised that it’s far too early to start planning for live after the virus. 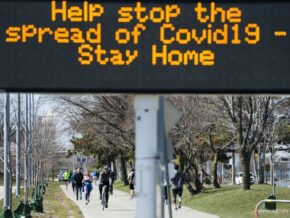 “I think they’re going to be paralleled to the province’s and just applied to the city,” mayor John Tory told CP24 on the city’s projections. “I think it says there’s been some progress but it is, by no means is it a cause for either celebration or for reopening to begin. “We’re still a long way from where we need to be.”

Social distancing has become the norm across the country as people are largely listening to the advice of public health officials and staying home except for cases when they need to venture to the grocery store or to step outside for some exercise.

Tory met with high-ranking city officials over the weekend to begin to lay out how the city would start to reopen once data. It was the first of several meetings as they piece together how to safely reopen the city.

“When do different industries open and on what basis? How do you pick who opens first and take consideration of the accounts that flow from that–things like public transit or if restaurants open, are they open completely,” said Tory. “Are people next to each other on patios or do you have spacing. “