There were no new cases reported Wednesday in the former virus epicentre of Wuhan, China and its surrounding province.

This is a dramatic development in the city which had been overwhelmed by thousands of new patients each day when the outbreak was peaking there last month.

Here in Canada as of Thursday morning, there are 690 confirmed cases of COVID-19 according to the Public Health Agency of Canada website. These include 214 in Ontario, 102 of which are in Toronto.

Of the Toronto cases, 10 people are in hospital, 4 are in intensive care, and 11 cases are under investigation.

All the more reason, she says, that we need to practice vigilant social distancing.

She reiterated that these include: avoiding contact with others, keeping at least six feet apart from other people, staying home and only going out for essentials like food and medicine, working from home, and doing grocery shopping online or having someone else do it for you.

Dr. de Villa used the example of places like South Korea and Japan as not having applied social distancing early enough, resulting in “disastrous consequences.”

There are a number of operational changes being implemented at the TTC amid the COVID-19 outbreak.

Starting Thursday, employees are able to wear masks at work, boarding a TTC vehicle will be by all available doors, and Toronto Community Housing clients with virus symptoms will be taken to health care centres by WheelTrans. 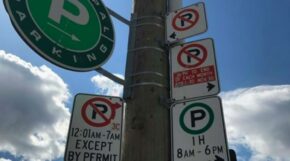 To make life easier for Toronto residents, until further notice, parking enforcement will be suspended for a number of offences, including on-street permit parking and on-street time limits such as 1, 2 and 3 hour parking.

On Thursday morning, we learned a TTC mechanic has tested positive for COVID-19. The TTC’s Stuart Green says the individual was not on the front lines and did not interface with TTC riders. Some 130 TTC employees who may have had contact with the mechanic are now self-isolating.

In another Toronto story related to the COVID 19 outbreak, a civilian member of the Toronto Police Service has tested positive for COVID-19. Police spokesperson Meaghan Grey says the employee does not work in a public facing role and those who worked in close proximity to the individual have been notified and advised to self-monitor. She says enhanced cleaning measures, such as additional surface cleaning in frequently accessed areas is also being undertaken.

MPPs are scheduled to return to Queen’s Park at 1 p.m. Thursday to pass emergency legislation which protects workers forced to stay home due to COVID-19.

But in the name of social distancing, there will only be 24 members in the house; 12 governing Progressive Conservatives, eight New Democrats, two Liberals, one Green and the Speaker.

Canada’s federal political parties are now working together to recall Parliament to get billions of dollars of aid sent out as quickly as possible.

The funding is meant to soften the economic aftershocks of measures imposed by health officials and governments to slow the spread of COVID-19.

The government is tapping 82-billion-dollars, with 27-billion in direct aid for Canadians, the rest in tax deferrals.

Finance Minister Bill Morneau says the money is a matter of saving lives by allowing more people to stay home and reduce the risk of overwhelming the health care system.

And Global Affairs Canada says at least 77 Canadians are on a trans-Atlantic cruise ship that has several COVID-19 cases among its passengers.

Costa Luminosa, which has more than 1400 people on board, is heading for the French Mediterranean port of Marseille.

A Global Affairs spokesperson says Canada is standing ready to provide consular assistance to the Canadians.