Toronto’s emergency operations centre is now working at its highest possible level amid the COVID-19 outbreak that continues to worsen.

The emergency operations centre was opened last week at a level one activation but the city quickly escalated it to level two in order to staff it 24/7 and gain access to other resources.

Last night, Fire Chief Matthew Pegg confirmed on Twitter that the centre is now operating at a level 3 activation, which is the highest possible level.

He says this was automatically triggered by the province’s decision to declare a state of emergency. 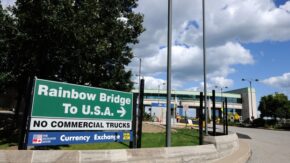 Canada’s border with the United States could soon be locked down for all non-essential travel as a further way to slow the spread of COVID-19.

It is being widely reported that representatives with both countries have been in talks to restrict north and southbound travel to a limited few essential workers, including truck drivers, airline crew members and healthcare workers.

This new measure would seem to exempt snowbirds, who are Canadian citizens or permanent residents but who winter in the southern U.S., to give them time to get home.

Tory explained this morning that the new non-essential travel ban is not going to shut the border to business.

“They’re trying to do this in a careful way but in a way that cuts down on the number of people who don’t have to be crossing the border,” Tory explained to CP24.

A sweeping federal economic stimulus package to combat the shock of COVID-19 is expected to be unveiled Wednesday in Ottawa.

“The federal government will do what it takes to get us through this crisis and to ensure that Canadian workers and Canadian businesses are in a position to come roaring back,” Freeland detailed.

The government spending is likely to be significant, approximately $20-billion by the estimates of many economists, or one per cent of the value of the national economy.

In another development related to COVID-19, a statement from WestJet Airlines says some of its passengers may have been exposed to people infected with the new coronavirus on 14 recent flights between February 28th and March 12th.

The announcement on WestJet’s website and social media lists the flights and affected rows, and says public health experts are recommending people who sat in those rows to self-isolate for 14 days after arrival and monitor symptoms.

A check of the Public Health Agency of Canada website this morning reveals there are 569 confirmed cases of COVID 19 in Canada.

Of those there are 189 confirmed cases in Ontario, including one death and five resolved cases.

Stateside, President Donald Trump’s proposed economic package to rescue the economy from the ravages of the novel coronavirus could come with a novel price tag, nearly one-trillion dollars.

Trump is pushing Congress to approve the stimulus package within days with the goal of having emergency checks in the mail to the public within two weeks.

In other news, LCBO says in response to the COVID-19 outbreak, store hours across the province will be reduced to 11 a.m. to 6 p.m. daily starting Thursday, March 19th.

And Metrolinx is reducing service by 30 percent on GO trains, buses and the UP Express as more people work from home.