Authorities at the oldest English-speaking university in the world have a who-done-it on their hands. 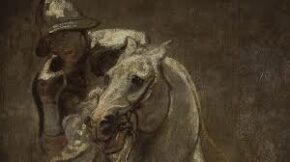 Three “very high value” paintings were stolen from a University of Oxford art gallery over the weekend.  The most prominent is “A Soldier On Horseback” which Flemish Master Anthony Van Dyck painted in the 17th century.

A local police spokesman says “the artworks have yet to be recovered.”

They’re appealing to witnesses or anyone with closed circuit TV footage from the area to come forward.