A feisty North Carolina woman spent her 100th birthday behind bars this week, by choice! 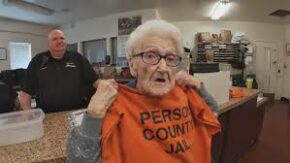 Ruth Bryant said being a jail bird was on her bucket list and when four Person County Deputies showed up at her long-term care home and asked if she was Miss Bryant, she said, “It all depends on what you want.”

She was wanted on a charge of indecent exposure.

She was then cuffed to her walker, placed in a squad car and taken to the country hoosegow as deputies dodged her kicks.

One deputy asked her to stop kicking because he had a bad knee.  She responded, “I’ve got two bad knees.”

She was issued an orange jumpsuit, finger printed and had mugshots taken before being released.

When she left the patrol car she offered the the deputies their next assignment. “She said people who make the ‘low damn’ seats in these cars, ought to be arrested.”