CITY, OUTSIDE WORKERS TO CONTINUE TALKING

The City and the union representing 5,000 outside workers have agreed to a 48-hour extension to continue bargaining. 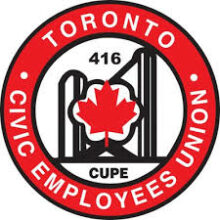 CUPE local 416 held a news conference to announce this afternoon to say talks are continuing.

Workers would have been in a position to strike or be locked out at midnight tonight.

“I will stay at this table for as long as it takes,” said Mariconda. “As I stated before, the city will determine if there’s a stoppage or not. It won’t be local 416.”

The union is worried about the city contracting out services and laying off city workers as a result. The city argues that there may be a time where privatization is warranted but also argue they have a great record of keeping people employed–even during changing times.

“We’re good employers,” said mayor John Tory. “Not one member of local 416 has lost their job in the last four years since the previous collective agreement was signed.”

The 5,000 workers run community and warming centres as well as skating rinks. They also deal with garbage pickup east of Yonge Street. Garbage pickup west of Yonge is contracted out but it could also be impacted by strikes at city facilities.

Snow clearing is largely handled by contractors and likely wouldn’t be impacted by job action.