CANADIAN RATIFICATION OF USMCA TO TAKE PLACE BY END OF FEBRUARY, FREELAND THANKS NEW DEMOCRATS

The new North American Free Trade Agreement is expected to be ready for a ratification vote in Canada’s Parliament in ten days. 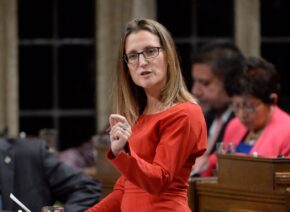 Deputy Prime Minister Chrystia Freeland has announced that study of the deal by a parliamentary committee will end February 28th.

She says that is thanks to the help of the New Democrats, not the Conservatives on the committee, whom she said wanted to extend study of the agreement into March.

But Conservative trade critic Randy Hoback says there is no circumstance under which his party would vote against ratifying the trade deal.

He says the Conservatives simply want to give voice to people who are concerned about the deal.