There has been another collision involving a pedestrian in the GTA. This one, a hit and run.

It happened Tuesday evening in Ajax.

A woman, believed to be in her early 20’s, was struck on Taunton Road East.

She has serious injuries, but is expected to survive.

Durham Region Police tweeted Tuesday night, “there is no suspect information at this time, but officers have found debris and car parts that will hopefully give investigators more information.”

Here in Toronto, there have been 1100 collisions involving pedestrians this year alone. Thirty-one have died. Nine of them were seniors.

According to a City of Toronto report on police data prepared as part of the city’s Vision Zero plan to reduce traffic deaths, aggressive and distracted driving contribute to more than fifty percent (52%) of all crashes which cause a death or serious injury on Toronto streets. 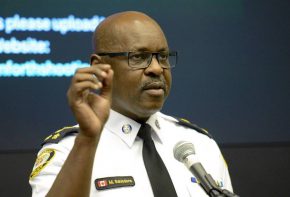 This past Thursday, Toronto Police Chief Mark Saunders received approval at the police services board meeting for a Vision Zero Enforcement Unit.

Members of the new traffic enforcement team will be on the streets cracking down on aggressive driving, starting in January.

Vision Zero was introduced in Toronto nearly 2 years ago. It’s a five year plan to reduce traffic deaths in this city to zero, but so far there’s been little success.