Voting has ended in Hong Kong with a massive turnout in an election seen as a barometer of public support for pro-democracy protests that have rocked the Chinese territory since June. 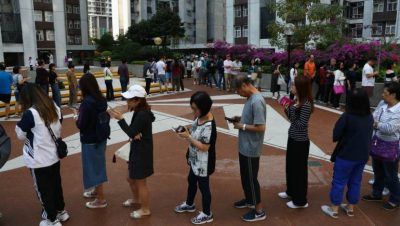 After polls closed at 10:30pm, the Electoral Affairs Commission did not immediately provide the final turnout rate. But at 9:30pm, it said that 69% of the city’s 4.1 million registered voters had cast ballots. That sharply exceeded the 47% turnout in the same election four years ago.

The district council elections were carried out peacefully, with hardly any voters seen wearing protesters’ trademark black or face masks.

David Alton, a member of the British House of Lords who is among a group of international observers, hailed the high turnout and said “it shows that there is a great groundswell in Hong Kong who believes in democracy.”