It’s said to be a huge win for renters.

Members of an Ontario tribunal have rejected an appeal by Airbnb landlords and upheld the city’s short term rental rules.

The adjudicator for the Local Planning Appeal Tribunal says the city’s Airbnb regulations “represent a reasonable balancing, ensuring that housing is provided for residents, that a full range of housing is available including short term rentals, and that the business and tourism economies are supported.” 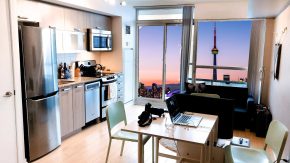 Toronto city councillors passed rules two years ago banning people from listing anything other than their principle residence as a short-term rental.

In a written decision Monday, the LPAT said the city’s approved rules have the potential to return up to 5000 of Toronto’s more than 21,000 Airbnbs to the long-term residential market. Those are the units where the property owners are not residing but rather using them exclusively as short-term rentals.

“Even if you return only 3000, it’s a huge win for renters in Toronto,” said Thorben Wieditz of Fairnnb, a pro-regulation coalition of tenant advocates, community groups, academics and hoteliers that participated in the appeal process.