Ian Williams has won the $100,000 Scotiabank Giller Prize for his debut novel. 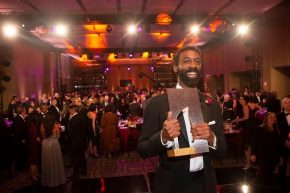 Reproduction traces the ties that bind a cross-cultural-chosen family in Williams’ hometown of Brampton.

Jury members praised Williams for his “masterful unfolding of unexpected connections and collisions between and across lives otherwise separated by race, class, gender and geography.”

In his acceptance speech at the glitzy event held at the Four Seasons Hotel in Toronto, Williams singled out Margaret Atwood on her 80th birthday.

He explained later he spent his summers reading Atwood’s poetry, and the shout-out to the Canadian literary icon was just a small gesture to express his gratitude.

Williams is also a Griffin Poetry Prize trustee and creative writing professor at the University of British Columbia.

Margaret Atwood was at the Giller Prize event last night and said she’s looking forward to catching up on the latest Canadian reads as her global book tour for The Testaments winds down.