Harvey Bischof, President of the Ontario Secondary School Teachers’ Federation, will also talk about the union’s “next steps.”

Teachers with the OSSTF are already in a legal strike position as of Monday, but union representatives are required to give five days notice before a strike, and have yet to do so. 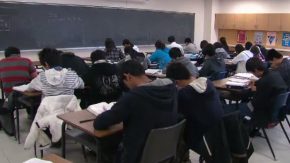 Ontario Education Minister Stephen Lecce says he remains positive that students can be kept in class.

“I need the unions to share that spirit of reasonableness,” Lecce explained, “It can’t just be a one-sided approach. We’re trying to encourage them to be reasonable at a time when all parties in this province are doing our part and so I think there is a pathway to do that.”

Elementary teachers are set to start a work-to-rule campaign on November 26th, that they say will target ministry and school board administrative tasks and will not affect student learning.

Catholic teachers voted 97 per cent in favour of a strike if necessary, although they are not yet in a legal strike position, while negotiations for Ontario’s French teachers continue.