GILLER PRIZE TO BE HANDED OUT TONIGHT, AS LITERARY ICON MARGARET ATWOOD CELEBRATES HER 80TH

The Scotiabank Giller Prize will be awarded Monday evening at the Four Seasons Hotel in Toronto.

A mix of familiar names and newcomers are in the running for the $100,000 honour, founded by the late Jack Rabinovitch in 1994 in honour of his late wife and literary journalist Doris Giller.

Newfoundland’s Michael Crummey is hoping to win for The Innocents after receiving nods from the Writers’ Trust and Governor General’s Literary Awards this season.

Latvian-Canadian writer and filmmaker David Bezmozgis will have his third shot at the Giller with the short-story collection Immigrant City.

Another returning nominee is Montreal-raised Alix Ohlin with Dual Citizens, while Vancouver-based Ian Williams vying for the prize with his debut novel Reproduction.

Singer-songwriter and Victoria-based Steven Price made the final cut for the first time for Lampedusa. 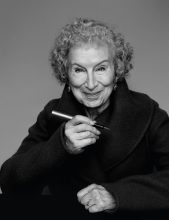 Atwood was on this year’s Giller Long List for The Testaments.

Atwood has received more than fifty-five awards, including two Governor General’s Awards, the first in 1966 for The Circle Game, her first major book of poems; the second for her 1985 novel, The Handmaid’s Tale, which was made into a movie. In 1981 she worked on a television drama, Snowbird, and had her children’s book Anna’s Pet (1980) adapted for stage (1986). Her recognition is often reflective of the wide range of her work. She is also a major public figure and cultural commentator.

Most of Atwood’s fiction has been translated into several foreign languages. A new Atwood novel becomes a Canadian, American, and international bestseller immediately.

There is a Margaret Atwood Society, a Margaret Atwood Newsletter, and an ever-increasing number of scholars studying and teaching her work in women’s studies courses and in North American literature courses worldwide.