It would seem Zoomer music legend Sir Rod Stewart does more than just sing about trains as he did with Tom Wait’s “Downtown Train,” he also creates them. 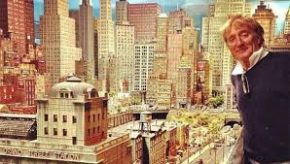 The 74 year old super star has revealed he has great passion for model railways. In fact, he’s spent the past 23 years creating a massive, intricate, model of the train systems in a blended New York and Chicago circa 1945.

Two months ago, Sir Rod revealed he had been given the all-clear after being treated for prostate cancer.  Last night he announced he’ll going to perform at a “secret dinner party” being organized by his wife to aid the UK’s Teenage Cancer Trust.  Stewart hopes to raise one million British Pounds.