DON CHERRY OUT AT ROGERS SPORTSNET 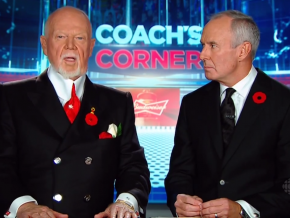 Bart Yabsley, Sportsnet’s President published a statement to Twitter that says in part: “After Saturday night’s broadcast, it has been decided it is the right time for him to immediately step down. During the broadcast he made divisive remarks that do not represent our values or what we stand for.”

Cherry came under fire for comments made singled out new immigrants in Toronto and Mississauga, where he lives, for not honouring Canada’s veterans and dead soldiers.

The comments sparked such an outcry to the Canadian Broadcast Standards Council that the broadcast watchdog was overwhelmed by complaints and couldn’t handle any more.