The world may never get this close to seeing Miranda Priestly in the real world.

Meryl Streep has been named the co-chair of the Metropolitan Museum of Art’s Costume Institute. 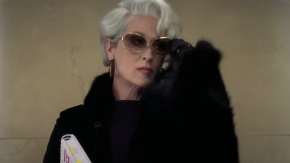 Streep played Priestly in the 2006 movie adaptation of the novel “The Devil Wears Prada.” She made the role iconic for the way she mercilessly talked down to her employees.

Undoubtedly, Met workers will be hoping that life doesn’t imitate art and that Streep is nothing like her character.

Many say the part was a thinly veiled fictional version of Vogue editor Anna Wintour.

The next Met gala’s theme is “About Time: Fashion and Duration.” It takes place on May 4th.

“The Devil Wears Prada” is also being made into a Broadway musical.