ELIZABETH MAY STEPS DOWN AS LEADER OF THE FEDERAL GREEN PARTY

Elizabeth May is no longer the leader of the federal Green party…effective immediately. 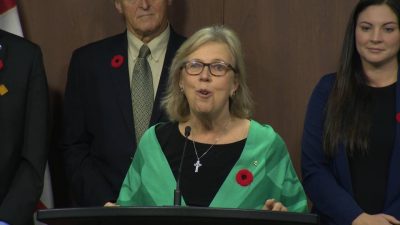 May told a news conference on Parliament Hill Monday that after 13 years in the job, she’s giving up the party leadership but she will stay on in Parliament to bolster the two other elected Green members.

May says she promised her daughter three years ago that the 2019 election would be her last as the party leader.

Deputy leader Jo-Ann Roberts is taking over as party leader for now.

May says a leadership convention will be held October 2nd, 3rd and 4th in Charlottetown next year.

May has also expressed a desire to put herself up for Speaker of the House of Commons, but she will not do that yet because it would take her out of the caucus of three Green MPs.