The black leather jacket and skin-tight pants that Olivia Newton-John wore for the finale of Grease have fetched almost $406 thousand at a weekend auction in Beverley Hills that brought in $2.4 million in total. 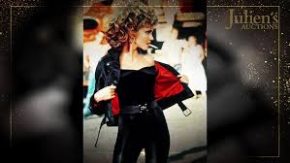 For the record, Newton John had to be sewn into those pants for the scene with John Travolta…

Some of the proceeds will go towards Newton-John’s cancer treatment centre in Australia.

At the age of 71, she is undergoing treatment for stage four breast cancer

The singer was diagnosed with the disease in 1992 and again 2013 and has opened up recently about using medicinal marijuana along with other natural remedies as she continues the fight.