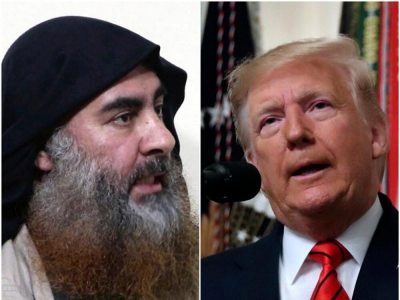 Trump says al-Baghdadi dragged three of his children into a tunnel as he was pursued by U-S forces and detonated a suicide vest, saying “He died like a dog, he died like a coward.”

A senior Iraqi intelligence official says that a few months ago, an Iraqi aide to al-Baghdadi was killed in western Iraq by a U.S. airstrike. The official says the aide’s wife was arrested in the operation and handed over by the Americans to Iraqi authorities.

The official further says the wife ended up being a key source of information on al-Baghdadi’s whereabouts and that through her, the Iraqis ultimately were able to pass along to the United States co-ordinates on al-Baghdadi.

Trump says the death fulfills the top national security priority of his administration.