The converted, open top, doubled-decker bus that Sir Paul McCartney decorated in psychedelic colours to take his entourage on the “Wings Over Europe Tour” in 1972 has been discovered in Spain. 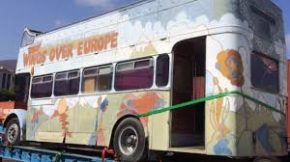 And it’s going to auction in England where it’s expected to fetch upwards of $30,000.

Sir Paul made an appeal for the double-decker’s whereabouts in 2017.

The bus originally served local routes in Essex and Norfolk in the 1950s and 60s before the now 77 year old music legend bought it and had it converted.

A Merseyside auction house is putting the bus on the block today.