A Canadian born scientist has won a share of this year’s Nobel Prize for Physics. 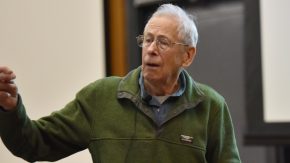 James Peebles is one of three scientists who have won the coveted prize for their contribution to the understanding of the evolution of the universe and  “Earth’s place in the cosmos.”

Half of the nearly $1-million award will go to 84 year old Peebles “for theoretical discoveries in physical cosmology.”

The other half was awarded jointly to Swiss astrophysicists Michel Mayor and Didier Queloz “for the discovery of an exoplanet orbiting a solar-type star.”

He was asked Tuesday morning after learning of his win if he had any advice for young people entering the field.

“You should enter it for the love of the science,” Peebles explained, “The awards and prizes are charming, very much appreciated, but that’s not part of your plans. You should enter science because you’re fascinated by it.”

Born in St. Boniface, Manitoba, Peebles did his undergrad studies at the University of Manitoba before moving to New Jersey for his science-professor career at Princeton University.

The three laureates will receive their prize in Stockholm, Sweden on December 10th.