Bianca Andreescu is back. And she hasn’t lost that winning form.

Andreescu returned to tennis action in the first round of action at the China Open, defeating Aliaksandra Sasnovich of Belarus 6-2, 2-6, 6-1. 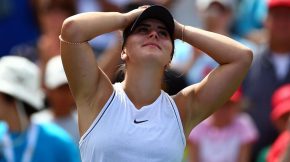 The Mississauga native had taken a few weeks off after winning the U.S. Open in New York to become the first Canadian to win a singles grand slam event.

Since then, it’s been a whirlwind for tennis’ newest star as she’s suddenly in high demand with interviews and celebrations. She was on-hand for a party in Celebration Square in Mississauga where Bonnie Crombie gave her the key to the city and announced that a “Bianca Andreescu Way” will be coming on one of the new streets in the city.

Andreescu has also locked down one of the eight berths in the season-ending WTA Tour Finals later this month in China.

Her second round match is a rematch of her U.S. Open quarterfinal against Belgium’s Elise Mertens.