A Canadian artist’s sculpture has been unveiled in St. Peter’s Square by Pope Francis as part of a Mass for the World Day for Migrants and Refugees. 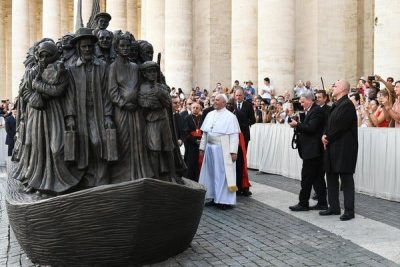 The work in bronze and clay by Kitchener, Ontario-based Timothy Schmalz depicts more than a hundred migrants and refugees from different cultural and racial backgrounds and different time periods.

Pope Francis said the he wanted the piece in St. Peter’s Square to remind everyone of the evangelical challenge of hospitality.

Schmalz, who travelled to the Vatican City for the unveiling, said he wanted the statue to bring forward the idea that everyone is sacred and worthy of human dignity and respect.

Many migrants and refugees from conflicts throughout the world attended the Mass, which closed with the unveiling of the statue.

During the Mass, a multi-ethnic chorus sang and the incense burned came from a refugee camp in southern Ethiopia, where refugees are rekindling a 600-year-old tradition of collecting incense