Pedestrian and transit rider safety is topping the news once again this morning.

Another pedestrian has been killed in Toronto. A man in his 60s was hit by a vehicle at Danforth and Pharmacy Avenues around 9 Tuesday night. He was later pronounced dead in hospital.

The night before, a 17 year old boy, now identified as Sammy Kumar, lost his life when he was crossing the road near Confederation Drive and Scarborough Golf Club Road.

These tragedies bring to 29 the number of pedestrians killed in Toronto this year to date, following 41 pedestrian deaths in 2018.

Even before Tuesday night’s pedestrian death, Toronto Mayor John Tory tried to reassure city residents that much is being done to reverse the trend.

“We have pages of improvements that are taking place to redesign streets, to change intersections, to install technology, red light cameras, photo radar, soon to come,” Tory explained on Tuesday morning, “And these are things we’re doing as fast as we can do them, across the city to try and get people to slow down and be more careful and to enforce the law.” 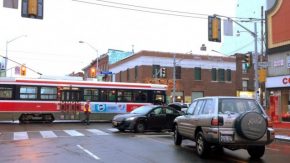 Meantime, TTC commissioners have unanimously approved a motion to call on the provincial government to approve the installation of enforcement cameras on the exterior of streetcars.

TTC Chair Jaye Robinson, along with NDP Transit Critic Jessica Bell, are pushing for the change, after a rider was hit by a dump truck as she stepped off a Bathurst streetcar last week. The woman escaped serious injury, but her close call has drawn significant attention to the dangers faced by streetcar riders stepping into a live lane of traffic.