WELCOME TO THE MULRONEY INSTITUTE

The former two term Progremissve Conservative Prime Minister, who retired from politics in 1993, now has an institute named after him at St. Francis Xavier University in Antigonish, Nova Scotia. 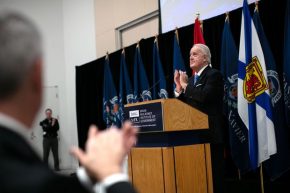 The $60 million Brian Mulroney Institute of Government is housed in a new 75,000 thousand square-foot building called Mulroney Hall and will offer what it calls Canada’s only public policy undergrad program.

The 80-year old former PM donated $1 million dollars to the original fundraising campaign and helped raise the rest with the exception of a $5 million dollar contribution from the government of Nova Scotia.