The federal election campaign has been affected by a bombshell revelation.

Not long after the photo showed up, Trudeau apologized for what he says was a racist act. 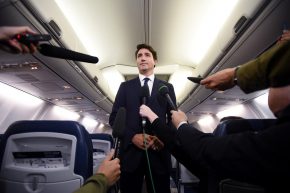 “I’m going to be asking Canadians to forgive me for what I did,” Trudeau told reporters on his Liberal campaign plane, “I shouldn’t have done that. I take responsibility for it. It was a dumb thing to do. I’m disappointed in myself, I’m pissed off at myself for having done it, I wish I hadn’t done it, but I did it, and I apologize for it.”

Trudeau also acknowledged there was a second incident.

“When I was in high school, I dressed up at a talent show and sang Day O with makeup on,” Trudeau further revealed.

It remains to be seen whether Canadian voters will accept the apology, but for now, there is no shortage of negative reaction including from all of the federal party leaders.

The federal election is on Monday October 21st.