The man who nurtured the careers of some of the most widely read and most influential cartoonists of our time has died at the age of 73.

As president of a syndication company, Lee Salem over saw comic strips like “Cathy,” by Cathy Guisewite, “Doonesbury,” by Gary Trudeau and Canada’s Lynne Johnston’s “For Better or for Worse.” 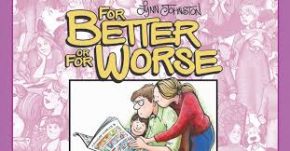 It originally ran from 1979 to 2008 and chronicled the lives of the Patterson family and their friends, in the town of Milborough, a fictitious suburb of Toronto. It’s still seen in rerun in more than 2,000 newspapers in Canada, the United States and some 20 other countries

He was awarded the 2013 Silver T-Square the US National Cartoonists Society. He retired in 2014.