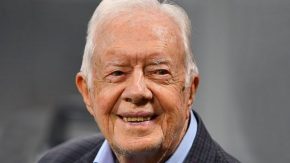 “I’m going to vote for one of them, and I haven’t decided yet which one,” Carter told a townhall in Atlanta, “I voted for Bernie Sanders last time, but I’m going to keep an open mind,”

Carter said for him, one of the major factors is figuring out which of the candidates can beat President Donald Trump in the 2020 election.

Carter also weighed in on how age plays into the office of the president. He says he doesn’t believe he could have managed the most powerful office in the world at 80 years old.

Of the democratic presidential hopefuls, Joe Biden is 76 and Bernie Sanders is 78. Trump is 73.