Do you think your teenage child has ridden in a car with a distracted teenage driver? 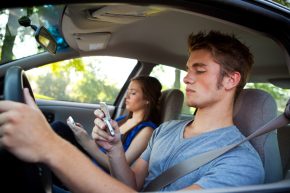 The most common distractor is thought to be loud music at 46 per cent, while cellphones are a close second.

Most of parents reported talking to their child about what to do if they felt unsafe in the car with another teen, the first recommendation being not to ride with them again.

While 63 per cent of parents say they had advised teens to tell the driver they feel unsafe, only 48 per cent told them to ask the driver to stop the car and get out.

The majority of parents did report proactive rules they use to prevent unsafe passenger conditions.

The survey is in the Michigan Medicine Journal.