CHAGALL, FAITHFUL TO HIS PIGMENTS

A five year research project into the art of Russian-French modernist painter Marc Chagall has concluded that he remained remarkably faithful to just eight pigments in his work. 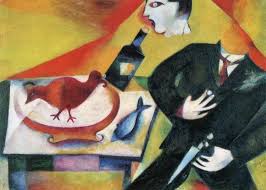 Chagall’s career took him from a tiny village in rural Russia to St. Petersburg, Paris and eventually New York.

Experts at Amsterdam’s Stedelijk Museum presented their findings today, after looking at 9 of Chagall’s paintings on surfaces ranging from traditional canvases to ceramics, stained windows, an opera house ceiling and even a tablecloth.

Chagall blended modernist styles such as Cubism and Fauvism in to his works.

The museum’s painting’s conservator says she was struck by how he was so consistent in the materials that he used despite moving around so much.