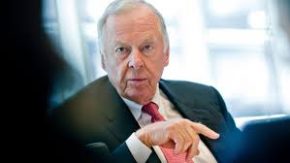 Former U.S. President George W. Bush said Pickens had become a household name because he was bold, imaginative and daring, and “generously shared his success with institutions and communities across Texas and Oklahoma.”

Among the institutions to benefit greatly from Pickens’ legacies was Oklahoma State University, his Alma mater.

Pickens was also described as a swashbuckling oil-and-gas entrepreneur, corporate raider, defender of shareholder rights, unlikely environmentalist as a former executive director of the Sierra Club and a controversial philanthropist.